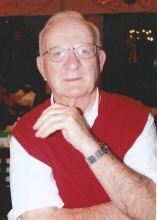 William (Bill) Puckett of Toledo, Ohio, passed away on Sunday, January 29, 2017, at the age of 91. Bill was born in Vinemont, Cullman County, Alabama, in February 1925. Although recruited to play for the St. Louis Cardinals, Bill enlisted in the Navy during WWII and served almost three years, in both the European and Pacific theaters.” He moved to Toledo after the war and lived here for more than 70 years.” Bill worked hard at many jobs in Toledo over the years.” He owned his own service station, worked at Bartley Company, and retired, in 1986, as Vice President of Warehouse and Transportation at Seaway Foodtown, Inc.” Bill spent the past 30 years of his retirement running a consulting business for warehouse design. Bill loved the outdoors and was a proud veteran. He was an avid gardener each summer and a devoted baseball fan.” His favorite location was the backyard deck surrounded by his flowers.” Throughout his entire life, Bill found great joy in doing for others and volunteering. Bill was preceded in death by the love of his life, his wife of 58 years, Lucy Bonds Puckett. He is survived by his three children, Nancy Puckett Dallett (Tom), Richard Puckett, and Barbara Puckett Crandall (Del); and five grandchildren, Abigail Dallett Reedy, Amanda Puckett, and William, Andrew and Edward Crandall. Bill's family wishes to express their deep gratitude to the staff of Promedica Hospice and Ebeid who cared for him during the past four months. In lieu of flowers, the family requests donations to Promedica Hospice or VFW.” There will be a memorial service for family and friends later this spring. Online condolences and service updates may be shared with the family at toledocremation.com

Your name will appear next to the candle you light.
Your condolence may need to be approved before it appears on this page. It may not appear immediately once submitted.

To leave a condolence, you can first sign into Facebook or fill out the below form with your name and email.


Your condolence may need to be approved before it appears on this page. It may not appear immediately once submitted.

Thank you for leaving a condolence.
Your comment has been submitted for moderation.